NOTICE to MEMBERS :
ALL MEETINGS, EVENTS, CLUB GATHERINGS POSTPONED UNTIL FURTHER NOTICE
Restrictions imposed following COVID-19 crisis make it impossible to continue normal Club activities.
Our committee has therefore had to postpone all club events until the situation improves.
This includes our Swap Meet. Details on that can be found HERE. 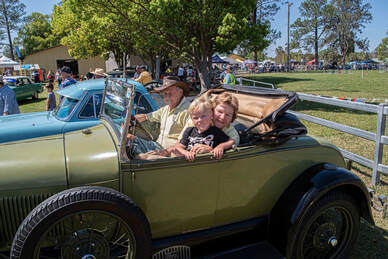 Sandy gives one of her grandkids a ride in Spokey's A Model at the 2019 Camden Haven Show
​The Hastings Auto Restorers Car Club covers the Port Macquarie, Wauchope and Camden Haven areas of NSW.

A happy group of motoring enthusiasts dedicated to bringing their historic vehicles back to their original beauty and having lots of fun using them for outings around the beautiful Mid-North Coast of NSW.
There's always something happening on our calendar of events.
​New members are always welcome. 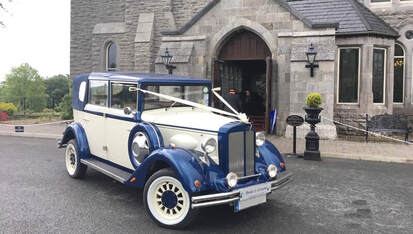 USING CARS FOR SPECIAL FUNCTIONS
Our Club has received several requests from people interested in using our member’s cars for weddings or formals etc.
Our Committee cannot assist in these matters and is not in a position to refer them to our members.
Some members have made their cars available for functions but that is a matter between the owner and those seeking to use the vehicle.
Our Committee cautions members to check with their insurance company to make sure they are covered for public liability in the event of accidents and so on. 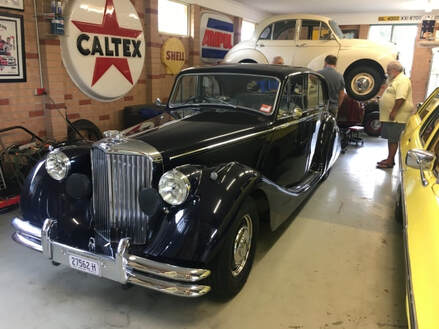 DAY TRIP TO WAUCHOPE
Tour of Rocket Turnbull
and David Hayes Workshops
Sunday, March 8th
After a delicious morning tea savoring Alice Turnbull's pumpkin scones, we checked out all the cars and memorabilia that Rocket has collected over the years. It is like a small corner of a car museum, with plenty to catch your attention from historic oil bottles to motorbike sidecars.
Then it was on to David and Margaret Hayes' house for a sausage sizzle. David then showed us how he is progressing with his restoration of a 1929 Buick 44 roadster. As usual with David's handwork, it was meticulously done. The chassis complete and glistening with a new coat of paint.
Thanks to Events Co-ordinator Laurie McGrath for organising a most interesting day out and to the Turnbulls and Hayes for their hospitality.
Photos of the day out can be found  HERE

​URUNGA CAMPOUT
Reflections Tourist Park
Urunga
7th February 2020
The Urunga Camp-Out was a wet and soggy affair but luckily most of the rain was at night.
Despite warnings of heavy rain, Friday was fine and allowed everyone to set up camp.
A enjoyable run up Dorrigo Mountain to Dangar Falls was capped by a superb morning tea put on by Rod and Ruth Holmes. Their glassed in verandah gives a panoramic view of the valley and falls but alas, showed only a valley full of clouds. The big treat was yet to come though, when Rod took us up to his workshop where he has a 1908 A3 chain drive Albion truck and an immaculate 1913 Albion tourer. He took everybody for a ride up the road and back as it chugged along on those two big pistons. In the corner of the shed a Mini Minor looked rather tiny compared to the Albions.
We then were taken to his neighbour's woodworking shed nearby. He is making up new framing for a T model Ford that Rod is restoring. Quite a challenge. The old frame he is using as a template consisted of a pile of rotted and broken bits on the workshop floor.
Back to the camp for pub for tea, then a day of sight-seeing around Coffs Harbour.
All in all a very enjoyable campout weekend.  Photos of the weekend are ​HERE 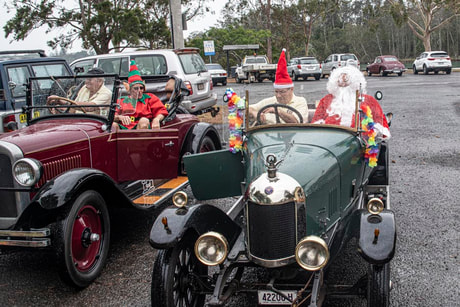 CHRISTMAS PARTY
Dunbogan Reserve
Dunbogan
Sunday, December1st
A rather sprinkly start for Santa and his big-eared elf didn't deter them one bit as they arrived in there open topped chariots.
Presents and Christmas hugs were handed out by Santa to the crowd as the rain held off and all had a jolly time.
It was decided to hold our Christmas luncheon in the Hall, which was bulging at the seams by the time we all squeezed in but not to worry, everyone stayed dry.
Club photographer John Waters has sent in a truckload of photos and these can be found HERE. 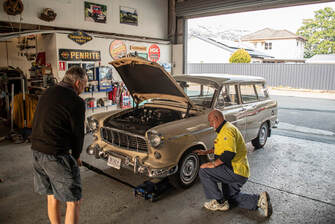 Rego inspectors, Bruce and Dave give a Holden FE the once-over
REGISTRATION DAY
DAVE SPOKES' WORKSHOP
Ocean Dr., Laurieton
Sunday, November 10th
Our annual car inspection and Registration Day was very well attended, despite the threatening bushfires all around.
The day started at 8am and our club supplied tea and coffee as well as morning tea and barbeque. It's a great opportunity to see all those cars the don't make it out of the shed as often as they could (and to say hello to the owners).
If you failed to make it for whatever reason, please note that you must be able to produce an up-to-date membership card if stopped by police. Contact Norm Dunn if you need to collect your receipt and card.
MEMBERSHIP FEES ARE DUE AND PAYABLE.
Our November membership draw had to go off and Sandy Waters was the winner on the second attempt.
You can find more pictures ​HERE

Important HARS business plans being discussed at Operations Central
CAMDEN HAVEN SHOW
Kendall Showground
Kendall
Saturday, October 19th
What a beaut day was had by all who attended the 2019 Camden Haven Show. It is a real country event... small, friendly and and a pleasant return to the simple life.
We took part in the Grand Parade scheduled, ferrying a few of the Show Officials and local member, Lesley Williams out to centre ring, with the Scottish Pipe Band leading the way.
Photos are...       HERE

No camp fires for this year's campout
KNORRIT FLAT CAMP-OUT
Knorrit Flat Riverside Camp Ground
25th-28th October
Our Knorrit Flat campout had some drama with bushfires burning in the mountains to the right as we drove in.
The park itself was unaffected and in reasonably good condition considering the long dry spell.
A wedding party was booked in opposite our sites but this ended up being cancelled after road closures stopped their bus and guests.
A trip up to Dingo Tops campground rounded off an "interesting" weekend, as the fires and uncertainty swirled around us but a few ports and some gossip afterwards around a legal campfire calmed any nerves.
Photos can be found....  ​HERE

​HARS 40th ANNIVERSARY DINNER
Westport Bowling Club
Port Macquarie
Saturday, October 12th
What a great night. Huge attendance with visitors from far and wide including a contingent of 21 from Kempsey Club, which was originally part of the old Port Macquarie Club. Memorabilia such as a sample of our old brown jacket and green cap brought along by foundation member David Hayes. The night was a buzz.
Club Photographer John Waters has sent in heaps of photos (too many to show here bt you can access a full report and gallery of snaps     HERE

CUNDLETOWN MOTOR SHOW
Market Square
Cundletown
Sunday SEPT 8th
The day was well attended by our members but the winds made for a chilly welcome.
John and Sandy Waters went along and estimated there were maybe 20% more cars on display compared to last year's inaugural event. John sent some excellent photos in which shows the variety on show.
You can see them   HERE

WAUCHOPE TRUCK  and MACHINERY SHOW
Wauchope Showground
Sat/Sunday JULY 13-14th
This year's show had an outstanding display of trucks, tractors and machinery on show. .
Mac trucks were the feature for the 2019 event and even had an old chain drive model on display.
One of the smaller units (left) was still capable of carrying a full sized truckie and wife around the ring effortlessly.
More photos HERE .

XMAS IN JULY LUNCHEON
Byabarra Cafe
​Byabarra
Saturday JULY 6th
It was off to the Byabarra Cafe for our Christmas in July outing.
​After Morning tea at Trish and Ian Newman's home, the observation run to Comboyne tested drivers and co-pilots as they tried to spy the objects from clues provided by Dave.
Then it was back to the Byabarra Cafe for a delicious lunch.
More details to follow shortly.
Photos can be found   HERE 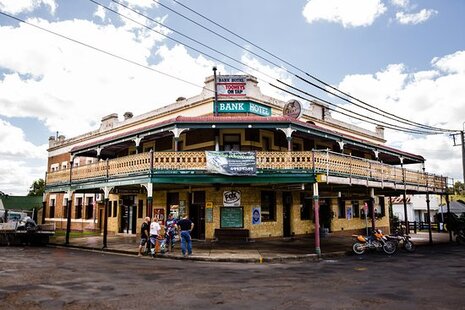 The grand old Dungog Bank Hotel
WINTER WOOLY RUN TO DUNGOG
Friday 21st to Monday 24th JUNE
Events Director Dave Spokes chose Dungog's historic Bank Hotel as our spot to snuggle down on our Winter Wooly Run.
​
The old pub was a step back in time but made for a really different experience. We were the only guests and took over the top floor. With only eight chairs for a do-it-yourself breakfast and one table it was a case of first-in best dressed, then get out of the way for the next hungry person.
The lounge downstairs with it's fire running flat out on a generous supply of old dry hardwood made an excellent spot for our meals.
Pictures of the event will be up shortly.

PRESIDENT'S RUN
9:30 am Sunday, 16th JUNE
The morning at Wavebowl went off well. Most of those who turned up had bowled at sometime in their life, though this was not always evident.
There was much laughter and a few dark horses who scored more than their share of strikes.
As usual there was plenty of food on hand thanks to Dellis and Daph and prizes of chocolates for winners and bush lemons for the dud deliveries.  A run via one of Chris's country shortcuts and a generous lunch at Wauchope Country Club rounded out the day

Bargain Hunters check out the wide variety of stalls
HARS SWAP MEET & MARKET DAY
7:00 am Sunday, 2nd JUNE
Our annual swap meet continues to attract crowds of enthusiasts and this year numbers exceeded previous years with more than 2,600 coming through the gates.
Stallholders reported good trade from the186 undercover and outdoor sites and the weather was kinder with only a few morning spots giving way to sunny finish.

More on this year's Swap Meet can be found HERE

DAY TRIP to CATTAI WETLANDS
Sunday, 7th APRIL
The Cattai Wetlands has been described as "The Hidden Gem" of the Manning Valley.
Once farmland degraded by acid-sulphate soil, it was purchased by council in 2003. After major remediation works it is now recognised as an international bird-watching site and provides sanctuary to over 180 different species of birds, kangaroos, wallabies and goannas. (And 450 billion mosquitoes so bring your aero-guard)
Three walking tracks are available including a 2km stroll around the wetlands, a ramble through coastal blackbutt forest and a short hike to the look out on Spring Hill, where you can see as far south as Cape Hawke and Crowdy Head to the east. 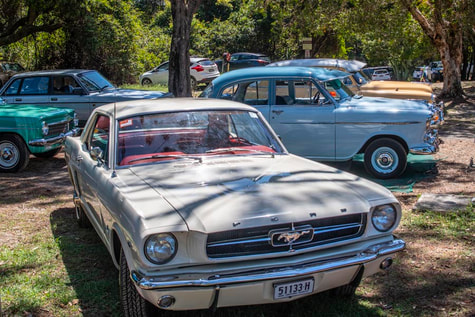 DAY TRIP to HAT HEAD
Sunday, 10th March
It was a beautiful day for the Sunday run to through Crescent Head to Hat Head and a large roll up of our members enjoyed the day.
​We explored the Left Bank Rd on our way through to Gladstone. Nice scenery but more plenty of potholes and patches. Considering the dry weather we were surprised at the lushness and height of the grass on river-flat country. (Happy cows).
Lunch in the covered camp kitchen at Hat Head reserve gave everyone a chance to catch up on the latest gossip.
John Waters photos are   HERE

THANKS TO OUR SPONSORS