Flood Damages Hurlestone Home
About one brick too high was how Howard described it as he watched Saturday's floodwaters slowly creep over the flooring at his Laurieton home.
With no power, sewerage and a crippled telephone reception there was nothing he and Lyn could do but watch.
When Dave Spokes and Daph and Col Shaw arrived Sunday morning, everyone pitched in and tore up the remaining carpet and under-felt to allow the floor to dry out.
The water just reached the floor in Howard's EH Holden but no major damage. Fortunately his MG was unharmed. 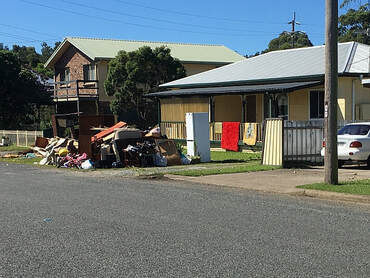 Just a soggy mess now
KEN AND RHONDA SAVE FALCON BUT LITTLE ELSE
It turned into a nightmare for the Ken Collins last Saturday. He was convinced that the water would not rise further but he said it just kept coming in wave after wave and was up to his waist. Still recovering from skin cancer surgery, early Sunday morning he took ill and had to be transported to Port Hospital for two days. The house and all contents were a write-off.
He's back home at son, Steve's place now and says he's OK. Fortunately Steve moved the Falcon to high ground before it went under completely, but  the Honda and Hyundai were lost.
We all wish him a speedy recovery and there are plenty of our members who will no doubt be falling over themselves to help our two club stalwarts, who have given so much to the club over many years.
Update 31/3/21: Yogi has advised that his daughter has now flown to Melbourne and brought back her spare Hyundai Excel. So he now has wheels again. A builder and a painter will fix up the house at "mates rates" to make it livable. He says he'll worry about furniture when he gets closer to moving in, but offers are already coming in.

LAURIE AND ELIZABETH WICKING GO UNDER TOO
The speed of the rise in the Camden Haven River caught the Wickings out, like so many others in Laurieton.
Their bottom floor had a foot of water through it by the early hours of Sunday morning and the garage and shed nearly three feet. They lost their SUV, and both the 1974 Mercedes and 1925 Morris Cowley were partly covered with floodwater. It is yet to be decided if the latter two can be salvaged. Like many others they will have to get in the queue to the insurers, to find when they can start looking to replace what's been lost. 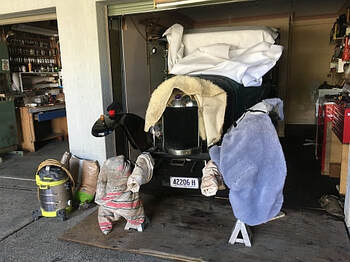 Laurie says he is overwhelmed by the offers of help that are still coming in, often from perfect strangers who just turn up on his doorstep with everything from free labour to pressure cleaning to a sandwich for the workers.
Six Fire-fighters turned up early on and moved lots of ruined furniture onto the footpath for collection, the pulled the carpets up and dumped them.
Meanwhile, at Gum Scrub, Stewart and Kerry Armstrong escaped the water but lost power as the lines came down feeding their nice high house. They may be waiting a week or more yet for it to be restored. Stewart has been helping neighbors, who he says have been badly hit, losing calves and fencing. One neighbor had to watch 150 bales of silage float away.
Kerry has been working in Telegraph Point Community Evacuation Centre, handing out food (Some supplied by Coles and Aldi) and other assistance as well as door-knocking to make sure those living in the older, badly affected areas are OK.
Lots of our members are helping. Dellis Gunn has cooked 30 meals for her daughter Rachel's local Gym Group. They are distributing them around the area. And husband John has been loading some of the piles and piles of wet household goods onto trucks with his son-in-law, Allan.
The community spirit being shown all over our communities is something to be proud of.

31/3/21:    I extend my sympathy to all those unfortunate members who have been impacted by the Floods.

Our club is large and has many members who maybe have bits and pieces of furniture or household appliances or a spare fridge that they would gladly pass on, to make up for what other members have lost to the floods.

There is a committee meeting tonight and I will raise this issue and work out how best we can help as a club.

A good attendance at the pre Australia Day outing. And good to see new members coming and enjoying the day.
The camp out weekend at Nambucca Heads went well, our trivia queen, Daph Shaw, did a Stirling job along with David Spokes who organised a good lunch outing to the "Pub With No Beer." Good air con  and cold beer inside the Pub, David.
It was a pleasure to finally see our General Meetings resume in February our first one since March 2020.
We welcome new members Pauline Bryant & Robert Chapman and Tony & Vicki Hanks hope you enjoy your membership and we look forward to seeing you at our events. There was good discussion on our Swap Meet which will have to be postponed for 2021 because of the current Covid-19 restrictions. All site holders will be contacted shortly with a new date for 2022 Covid-19 permitting.
​
At our March General Meeting we will be holding our AGM this is in line with the NSW Fair Trading Covid-19 requirements. We will need members to come forward to fill the vacancies from retiring Committee members. Please give any Committee members a phone call if you are interested in a Club Committee position.

We also need to finalise some of our new Club Rules if time permits at the March General Meeting.
Take care everyone, see you soon.
Safe Motoring,
Chris Whalley 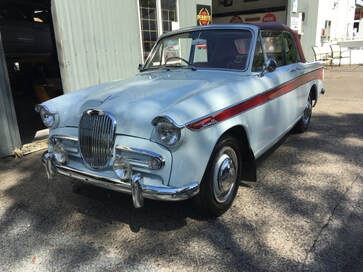 BRUCE HAS A NEW BABY
There a new addition to Bruce Wilson's fleet of vehicles. He has bought a 1961 Singer Gazelle convertible, which is in absolutely immaculate condition.

Laurie Knight heard that it was up for sale and knew the cars history, because he in fact owned it at one time. So Bruce did something he's never done before and bought it sight-unseen,

The Gazelle now joins his 1958 Black Gazelle Sedan, the Hillman Californian and 1957 Magnette (which is in the process of being sold).
Bruce will now be able to drive around with the top down and maybe "pick up some chicks".... maybe.

NEW FACES ON OUR COMMITTEE

Steve Stewart
NEW TREASURER AND REGISTRARS
There have been several changes to the makeup of our committee following their meeting in July and August and September.

Health issues have caused long-time registrar Ken Collins to call it a day. He has certainly done his bit for the club. Peter Denham has volunteered to fill the gap and Assist Dave Spokes in keeping track of our vehicles.

​  Another long-serving committee member, Norm Dunn submitted his resignation from all positions. Norm has been meticulous in controlling our finances over the years.
Steve Stewart has offered to act as caretaker treasurer until an AGM can be held. Steve has worked for many years in banking and is well qualified to keep our finances in order.
​
Finally committee members John and Sandy Waters are moving down south to Ariah Park and reckon it’s a bit far to attend meetings. We’ll miss Sandy’s happy face and John’s truly professional happy snaps.

Thanks to all the retirees for their hours and hours of service. They are the ones working away in the background, keeping our club running so smoothly. 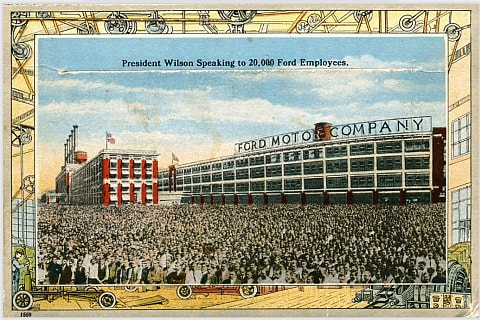 A postcard from 1917 gave a fascinating look into the spectacular expansion of the Ford car industry.
Ford Motor Company produced its first cars in a rented building on Mack Avenue in Detroit starting with the model A.
In the early years just 1700 cars were produced. 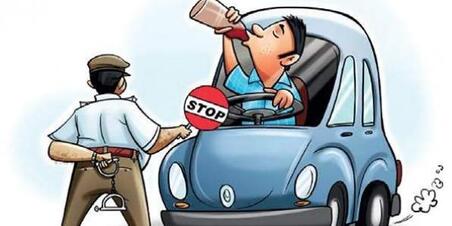 As from 20th May 2019, drivers will be hit with hard hitting penalties.
First time offenders with low range alcohol (0.05 - 0.08) will receive an automatic 3 moths licence suspension and a fine of $561 (OUCH).
The same applies for learner, P1 and P2 drivers over zero and
taxi and bus drivers etc over 0.02 limit.

These drink driving reforms passed NSW Parliament in September last year and the NRMA recently surveyed their Members about these penalties and found that over two-thirds of people support this new law. Support is even higher (76%) in regional areas. Over 700 participants responded to questions about the new drink driving reforms.

Under the new laws, simpler and more certain penalties will also apply for drug drivers. Offenders who drive with the presence of illicit drugs for the first time will receive a $561 fine and a three month licence suspension if the offence is confirmed by laboratory analysis.

Alcohol related crashes claimed the lives of at least 68 people on NSW roads last year, accounting for nearly one in five road deaths, including 55 lives lost on country roads. Fatalities from crashes involving a drug driver accounted for similar numbers of deaths.

The NRMA recently released "Still Smashed" prior to last year's Christmas party season to remind revellers of the risk of drink driving. The report found that almost one-quarter (23%) of drinkers believed they were still over the legal limit the next morning and an alarming one-in-four (27%) of those still got behind the wheel.
The full article can be found HERE 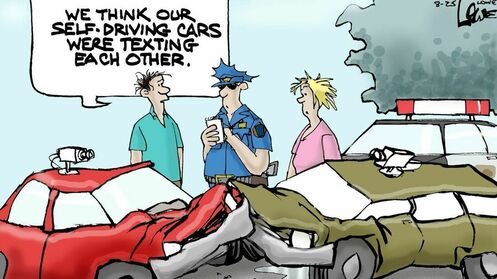 NRMA WARNING ON MOBILE PHONES IN CARS
Demerit point increase From 17 September 2018. Drivers who use a mobile phone illegally will be penalised an extra demerit point, up from four to five. In double demerit points, it doubles to 10 points. If you've lost 3 points for any offence in the last year or do so in the next 3 years, there goes your licence. That's for ordinary licences, special licences have even less points to play with.
Distracted driving is fast becoming a severe and growing threat to road safety.

Using a mobile phone while driving increases your risk of a crash four-fold. (US studies have found talking on a phone is worse than drunk-driving and texting is more than 16 times as dangerous. LA Times.)

In NSW, drivers or riders can use their mobile phone to make or answer a call and use the audio playing function (e.g. music) only if the phone is either: 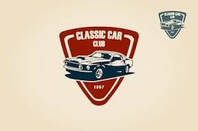 You can find them HERE

SOME INTERESTING NEWS ITEMS FROM ALL OVER